I took a quick trip to Washington DC this past weekend to see GF Guy’s show for the last time. 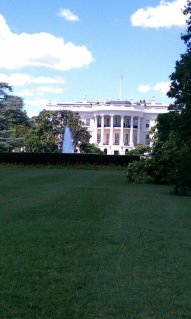 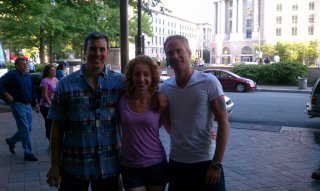 Hanging with the other “Tour Widows” who were out visiting.
This year has been such a growing experience for both of us. We have grown as a couple, as individuals, & as a family. I wouldn’t change it for the world. BUT… I AM SUPER EXCITED FOR GF GUY TO COME HOME!!!!!!!!!!!!!!!! I want to make him an extra special dinner for his first night home, but am stuck! Any ideas/suggestions would be most appreciated!
Now for a few random musings:
The new GF Kellogg’s Rice Krispies really do snap, crackle, & pop!

I’m enjoying my fish while I can! This one was topped w/ Organicville’s Pineapple Salsa! YUM! 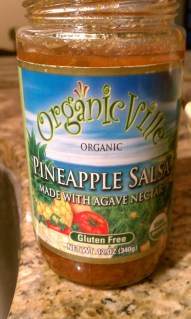 Drinking out of a fancy wine glass makes me feel special. …even if I’m only drinking water… 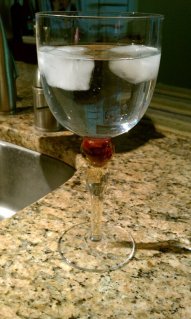 Like Loading...
I realized something last night.
I am going to have to start cooking again when GF Guy comes home. He will be home for at least 6 months starting July 25th!!!!!!!
Here’s the deal… When it’s just me, I tend to open the refrigerator, pull out every vegetable on the planet, throw it into a pan with heaven knows what (usually whatever I can scrounge out of the refrigerator or cabinets), plop it into a bowl with diced tomato & avocado, & call it dinner. With GF Guy, I don’t think that will go over so well. Don’t get me wrong, he loves me cooking. The think is, very few people would consider a giant bowl of buckwheat, kale, tofu, diced tomatoes & avocado, & homemade cocktail sauce a yummy dinner. That is honestly what I ate last night…. AND I LOVED IT!!!! Don’t judge!
I’m also going to have to stop making fish. GF Guy loathes the stuff.
So, no more Veggie Dump Bowls… 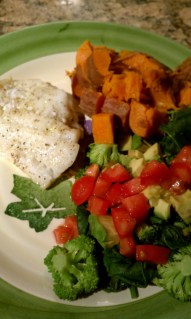 & no more puppy boyfriends in the bed.

Big changes are a comin’!

Like Loading...
Throughout the years, I have become a master Gluten-Free traveler. I have traveled everywhere from Canada, to Cancun, to San Francisco, & Savannah.

I traveled for 2 years with GF Guy on a bus & truck Broadway show tour. It was me, a mini cooler, & a hope & a prayer! I ate lots, and I mean lots, of tuna over those 2 years. I also ate some amazing food at little gluten-free savvy joints all over the country. It taught me amazing survival skills. However, that’s what it was… survival. Food was not enjoyable. It was not delicious. It was something to keep alive and that was all. Now, when we travel, GF Guy and I try to pick places where food won’t be a problem. We don’t always, however, plan the vacation….

For Christmas last year, my parents bought all the kids and their significant others a vacation, a cruise to Bermuda, be be exact. I lived in Bermuda for a few years when I was little. My little brother & sister were born there. This trip was our first time back in almost 20 years! Yes… I’m that old.
We boarded our cruise ship in NYC and set out on our voyage. Let me tell you what, it was HEAVEN!
Norwegian Cruise Lines was not a company I had heard about when researching gluten-free cruises. Because of this, I was slightly nervous about my food situation. I need not have worried. The crew aboard the Norwegian Gem, especially the Maitre d’, Richard Bull, were exceedingly attentive & wonderful. Each evening, I perused the next day’s menus & placed my “special order” to be prepared in the special food allergy kitchen. The chefs delighted me at every meal creating gluten-free, dairy-free twists on their recipes that never lacked for flavor or complexity. I was surprised with special desserts, muffins, and bread by Richard, the Maitre d’. Each plate was triple checked by the cooks, waitstaff, & finally the Maitre d’, himself, before being presented to our table. The family joked that Richard was my “special chef” because of the close attention he paid to me throughout the cruise.

I am now a Norwegian Cruise Lines devotee for life! If you have food allergies or celiac, know that you will be able to enjoy a wonderful vacation with NCL!
Here are some pictures from our amazing trip. Enjoy!

Something happened today. I think it was a moment of significance, but want your take on the matter. So, I was walking along the sidewalk on my way into the Gourmet Pizza Co. with a friend.

Incidentally, the Gourmet Pizza Co. has amazing gluten-free/dairy-free pizza, but I digress. As we were walking along, a black SUV pulled over, rolled down their window, & a voice shouted, “I might have known I would run into you at a gluten-free place. They have bangin’ pizza!” It finally happened! I ran into someone I knew out and about in town. It wasn’t a friend of GF Guy’s family. It wasn’t an acquaintance from work. It was just someone I know from dance class. It was the first time this has happened to me since moving here, and it was cool!
Don’t get me wrong, this isn’t the first time this has happened in my life. In fact, it happens every time I go to NYC, because that’s where most of my friends actually live. It was just the first time it has happened here. It made me happy!
If you haven’t already guessed, I can be pretty introverted when it comes to letting people really know me. I was always the shy kid reading in the corner. As I’ve grown, I have learned to adopt a work persona that makes me seem extroverted and extremely confident. Truth be told, I am still just as unsure as the pimply teenager about to ask the head cheerleader to prom. I just know how to hide it better.
It feels like no matter how old you are, there will always be a part of you that is stuck in junior high wired with braces and a mop of frizzy hair atop your head.

But that’s okay. That’s what makes us human.
This has been a long post just to say, I’m happy. I finally have an identity in this town. I think I’ve finally found a home.
Now that I’ve rambled for ever, let’s move on to dinner! Brace yourselves! You are about to see what I’ve been eating, or a variation there of, every night for the past few months. Every night, that is unless I have parked my behind at my in-laws kitchen table. Which, I am embarrassed to say, I do more often than not now that GF Guy has been away.
Here you have it…

Baked Cod with a cubed baked Sweet Potato, Steamed Broccoli & Spinach, & diced Tomato & Avocado. Sometimes I will have Tofu instead of fish, or throw some Garbanzo Beans in the mix.  See, I told you it was boring.
Now, all I really want is cake, but I’m too lazy to make myself one. I guess I’ll go to bed and do a crossword puzzle like an old lady. At least I have this handsome man to snuggle with!

Tune in tomorrow to hear all about the amazing vacation I just returned from! Here’s a hint: It was a tropical island! Any guesses? 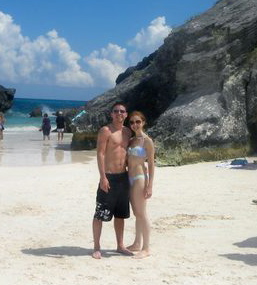 Like Loading...
A few weeks ago, I received a box bursting with cookies from Enjoy Life Allergy-Free Foods. I was super stoked to find 1 of each of their new flavors of Allergy-Free Crunchy Cookies!

When they say crunchy, they mean crunchy! These were the last thing I expected from a company known for their soft, almost muffin-top like, cookies. Guess what, ENJOY LIFE HIT THIS ONE OUT OF THE PARK!
The Crunchy Double Chocolate my hands down favorite. Seriously, these cookies are the best (other than homemade) cookies I have ever had. I am not being paid to say that. They are ridiculous! I have been slowly working my way through the box, savoring one cookie crumbled over pumpkin puree for dessert each night. So, so good!
The Crunchy Chocolate Chip was just okay… Nothing spectacular. Then again, unless hot and fresh from the oven,, chocolate chip cookies just aren’t worth the calories, in my humble opinion.
Next up, Crunchy Sugar Cookies! These would be delicious as the base for a Strawberry Shortcake-type dessert. They were a little sweet for my taste, but then again, they are sugar cookies.  If that’s your thing, then you will LOVE these.
The Crunchy Vanilla Honey Graham cookies were the last to face my scrutiny. Crunchy, thin, perfection, these cookies taste just like graham crackers! Upon discovering the taste similarity, I may, or may not, have done a happy dance around my kitchen, before setting to work on summery dessert to take to my grandmother’s house for Sunday dinner.
Using 2 cookbooks, gifts from my Fairy Blog Mother,

I combined 2 recipes, changed a few ingredients, and created a lovely Blueberry Tart with a Honey Graham Crust! 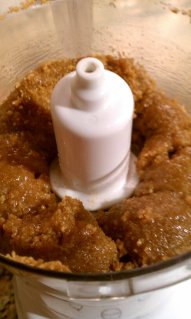 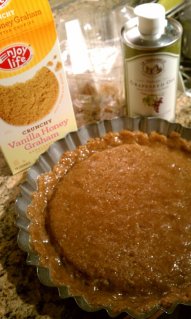 I can not wait to see what everyone thinks. Though, I have a feeling they will love it! 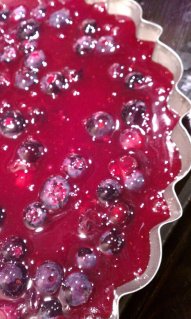 Check your local health food stores for these cookies, and the rest of Enjoy Life Foods’, new product line. They have, once again, out done themselves!

Like Loading...
I’m not dead. I’m busy.
I’m busy and have been cooking boring, repetitive meals.
I have also been out of town for weeks on end. Mind you, I have been having a grand time! I am loving my new job and situation in life. I have been blessed with wonderful, supportive family and friends. I think the time has come to change this blog’s direction… again. I will occasionally be posting recipes, and am always available for questions regarding recipes. Food is, after all, my favorite thing. I’m going to go back to more of a healthy living blog. You will hear about my daily exploits navigating a gluten filled world. You may even go on vacation with me! Only time will tell. All I know is, if I don’t change this blog’s focus, it will end. I don’t want that, and I hope you don’t either. So, let’s see where the wind takes us! Thanks for sticking with me!