Wow… I have been so busy with work. Don’t get me wrong, I LOVE it. It just means I haven’t had time to create anything new in the kitchen. As such, I have been neglecting you all terribly. Sorry folks!
So…. what has happened since we chatted last? Well…. I went to my sister in-law’s Bridal Shower and brought Gluten Free Mini-Muffins and Gluten Free Mocha Chip Biscotti. This was my first Bridal Shower ever and it was so much fun! (GF Guy and I planned our wedding in a week and a half. Consequently, we didn’t have bridal showers, etc…. It was totally worth it, though. Dragging out the planning process is just too stressful for me!) Anyway, back to the shower. We played the game where you split in to teams and make a wedding gown out of toilet paper. Guess what…. my team won!!!! 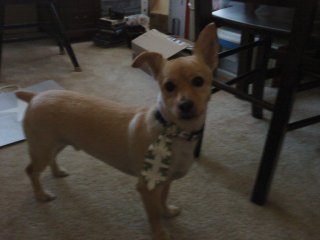 He looks like Papi from Beverly Hills Chihuahua! hahaha Bless his little heart!
That’s pretty much it for news… Moving on to the food…
Tonight’s dinner was an old recipe served in a new way. I made my Chana Saag recipe, but instead of serving it over quinoa, we stuffed it in a baked sweet potato!

Perfection! Some people stuff their potatoes with butter, cheese, and bacon bits. We stuff ours with spinach and chickpeas!
While dinner was delicious, I miss creating new things in the kitchen. I just haven’t been inspired to cook anything new lately….
I need some kitchen inspiration! Anyone?! This is a Culinary SOS!!!!

2 thoughts on “Let’s Hear It For the Toilet Paper….”